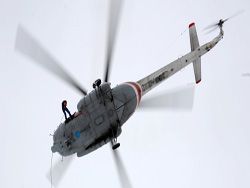 The commander of the MI-8 helicopter, the message on which loss appeared earlier on Saturday, told that 11 passengers of the aircraft managed to escape when falling in the sea, reports "Interfax". The destiny of other passengers remains to the unknown.

«According to the commander onboard the helicopter there were 16 people, 11 of them managed to escape, the destiny of the others while remains to the unknown», – is told in the message, which agency received from the Ministry of Emergency Situations Far East regional center.

Earlier "Interfax" source referring to words of the pilot reported about at least 10 survived. In total onboard there were 16 people: 13 passengers and three crew members. It is reported also that by the helicopter there could be representatives of the VTB Leasing company. Upon crash criminal case is brought.

Department opened phone of the hot line on which it is possible to learn information on victims and a course of a rescue operation: 8 (4212) 41-62-60.

Earlier it was reported that the helicopter was wrecked in three and a half kilometers from a place of the planned landing.

«At 15:45 on August 15 from the settlement of a name of Paulina Osipenko the Mi-8 helicopter took off and at 17:20 should make landing near Ongachan’s lake of the Tuguro-Chumikansky municipal area. In due time the helicopter did not land and on communication did not leave», – was reported on a site of the regional Ministry of Emergency Situations.