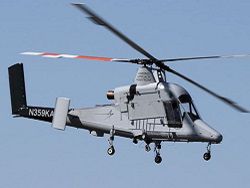 In the USA annually forest fires devour hundreds thousands hectares of the wood, sowing chaos not only in fire epicenter, and in big radius. For opposition to natural disaster the Lockheed Martin aviacorporation in partnership with the space producer of Kaman created fleet of pilotless helicopters fire the K-MOVE.

The wonderful helicopter the K-MOVE initially developed for the American Air Force in Afghanistan: pilotless K-MAX productions Kaman excellently consults without the pilot, and the board computer finds the ignition centers. Its loading capacity is equal 2700 kg of cargo during flight above sea level and 1800 kg of cargo when flying at height of 4500 meters. The helicopter is convenient for round-the-clock air support at suppression of fires, it works at peak loadings, and the landing is necessary only for refueling and a water set.

«Such helicopter help renders the notable help to firefighters on the earth, and manages not too expensively. Integration of technologies twice reduces time of suppression of a fire, allowing to be guided under way in a situation», Mark Befrik from Department of internal affairs noted on recent tests of the K-MAX helicopter in the State of Idaho.

On demonstration in Lucky Pik on helicopter base nearby Boyes, Lockheed and Kaman struck imagination with abilities of the pilotless K-MAX helicopter. Directly in the face of guests K-MAX took and departed away to the next pond to scoop a water bucket. After flew in a point of "fire" and started to fill in "fire" accurately on the line to exclude flame distribution. The Lockheed and Kaman helicopter within 2,5 hours conducted the suppressions procedure, showing accuracy and reliability of the K-MAX model.

The national center of fire service of the USA notes that 2015 became the champion of decade – to the middle of October fire destroyed 3,8 million hectares of the territory. «We are obliged to investigate the technologies improving fire business – after all healthy environment is the best dividend for taxpayers», Befrik reminded. Considering success of tests of clever equipment for fire extinguishing, K-MAX will arrive on service soon the firefighter, helping to bridle a flame of fires storming on all country.