Poroshenko withdrew from mission of the United Nations eight helicopters 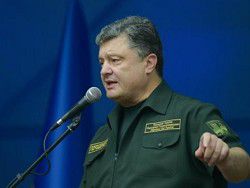 The president of Ukraine Peter Poroshenko withdrew eight helicopters from a zone of performance of humanitarian mission of the United Nations, the press secretary of the president Svyatoslav Tsegolko reported to Interfax agency.

"During delivery of awards by the serviceman which took part in operations in the east of Ukraine, the president informed that withdrew eight modern helicopters from a zone of performance of humanitarian mission of the United Nations", – told to Tsegolko.

He specified that helicopters are withdrawn for their further sending to a zone of power operation in the east of Ukraine. According to Tsegalko, these helicopters already are in the republic.

In May scandal in connection with use by the Ukrainian military near Kramatorsk of helicopters with symbolics of the United Nations which were involved in a course of peacekeeping operation in Congo burst.

Besides, in letters on the help, the signed United Nations and the countries providing the military contingent for peacekeeping operations, provided RT, it was told: "The government has the right to use the flying means noted by special identification marks only for flights within United Nations missions".

On August 25 head Sergey Lavrov declared the Ministry of Foreign Affairs of the Russian Federation absence "to any information on investigation of video certificates that the Ukrainian army used helicopters with marking of the United Nations" ended with what.