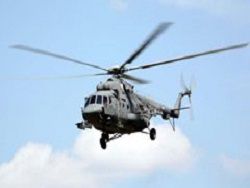 It is finishing party within the contract with "Rosoboronexport" which assumed delivery of 48 air cars. Remained four were transferred within the additional contract.

Today China – one of the largest operators of helicopters of the Russian production. In particular air Mi-171E cars successfully use in country regions with a difficult relief and severe climatic conditions.

It is planned that «Helicopters of Russia» will present one more copy – Mi-171A2 – among new development within an exposition on the international aerospace salon in Farnborough which takes place in these days in Great Britain.