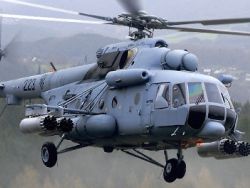 The portfolio of firm orders for helicopter equipment «Helicopters of Russia» following the results of 2013 made 808 units, is told in the press release of the holding which has arrived in edition to "Lenty.Ra".

Last year the holding carried out deliveries of helicopters of nine types to ten countries of the world. In total 275 cars that were told to 15 units less similar indicator of 2012 to customers. Thus at the enterprises of holding 303 helicopters were assembled. In «Helicopters of Russia» "Lente.Ra" explained that the remained 28 helicopters pass now various tests and will be delivered to customers during 2014.

According to the financial report «Helicopters of Russia», following the results of 2013 the revenue of the company made 138,3 billion rubles. In comparison with a year before this indicator increased by ten percent. The profit of holding grew by 1,3 percent and reached 9,5 billion rubles.

Earlier it was reported that «Helicopters of Russia» began deliveries of multi-purpose Mi-17B-5 helicopters to Afghanistan and India under the contracts signed in 2013th and 2012 respectively. In total 22 cars of this kind should be transferred to customers. The Afghan military will receive all contracted helicopters till the end of 2014, and Indian – in 2015.

It is expected also that in 2014-2015 the Russian holding will deliver to the countries of the Asian and Pacific region of 35 helicopters. The countries of this region maintain now more than 150 helicopters of families Mi-8/17, Mi-26 and Ka-32. In January of the current year in South Korea the service center of service of multi-purpose helicopters of Ka-32 family opened.