Russia will offer Egypt the helicopters 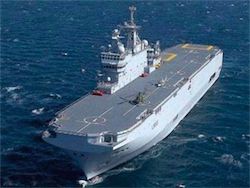 Russia will offer the helicopters created for "Mistrals" to Egypt if Cairo makes the decision on acquisition of these helicopter carriers at France, "Rostekh’s" general director Sergey Chemezov told to journalists.

"If Egypt after all makes the decision to get "Mistrals", of course, we will offer our helicopters as they were adapted and were created under this ship", – he told on Wednesday to journalists at Kalashnikov concern visit.

Chemezov added that if Egypt will not get "Mistrals", "Rostekh" will offer them to the Ministry of Defence of Russia. "We practically carry on now negotiations with our Ministry of Defence that these helicopters were used by our ships", – Chemezov told.

"Rostekh’s" head did not begin to specify volume of compensation which Russia received for undelivered "Mistrals". "We return everything that we paid", – Chemezov noted.

Week earlier it became known that France agreed about sale of "Mistrals" to Egypt. Moscow did not begin to object concerning this decision.