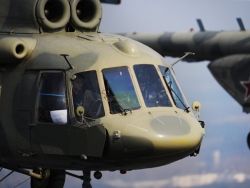 The head of the Ural investigatory management on transport of SK of Russia Dmitry Putintsev declared that the Mi-8 helicopter of the UTair airline which has failed in Congo, according to preliminary data, was wrecked because of a mistake of the pilot.

«Across Congo we come to a conclusion that as a result of climatic conditions there was an error of piloting», – he told, reports RIA Novosti news agency.

The Russian Mi-8 helicopter broke in Congo in March. The helicopter carried out Shabund’s flight – Bukavu in the conditions of a storm rain in the mountain district. Onboard there were four crew members, passengers and cargo were not. According to the representative of embassy of Russia in Congo, onboard the broken helicopter there were four Russians. The consul of embassy of Russia in DRK Alexander Tkachev reported later that survived in accident of the Mi-8 helicopter is not present.

According to the Russian embassy, into structure of crew entered captain Vladimir Safonov from the Tyumen region, steward Evgeny Nikitin from Tyumen, the second pilot Sarafanov from the Yamalo-Nenets Autonomous Okrug, flight mechanic Alexander Bessmertny.

The helicopter was found on March 10 in the remote region of DR Congo in the mountain jungle at height about 2700 meters. Last time it contacted on removal of 10 miles from the Bukavu airport at 10.17 (UTC time).