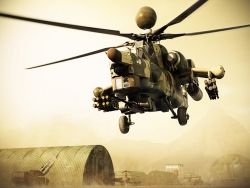 To the port Umm-Kasr in the south of Iraq on Saturday there arrived party from 13 modern Mi-28NE helicopters «Night hunter» of production of holding «Helicopters of Russia», reported As Sumariya TV channel.

The TV channel specified that the Russian military equipment will be used in anti-terrorist operation in Anbar’s province in the west of the country. According to its data, it already the second party of helicopters of Mi who has arrived recently on arms of the Iraq army. Earlier to Iraq profits of 15 more such cars, ITAR-TASS transfers.

In the autumn of 2013 the first group of the Iraq pilots and technicians finished training on the basis of the Center of fighting use of army aircraft in Torzhok.

Baghdad will receive in total 40 helicopters Mi-28NE and Mi-35 which expects to use for protection of borders and fight against terrorists in the Iraq territory. The contract in cost of 4,2 billion dollars on delivery of military production was signed by Russia during visit of the president of Iraq to Moscow in 2012.