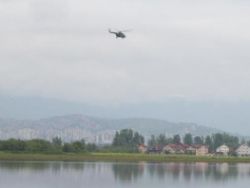 In the Leningrad region the personal helicopter of the general director of one of the Petersburg firms is found, on a place of crash bodies of two victims are found.

About it on Sunday reports ITAR-TASS referring to the chief of Northwest management of Rosaviation Oleg Grinko.

Fragments of the broken helicopter are found in the boggy district about the settlement Rakhya of the Vsevolozhsk area. As it was reported before, besides Vasilyev, onboard the helicopter there could be one more person. According to preliminary information, on a place of the tragedy bodies of two victims are found.

In the evening on May 13, at 22:35, the Eurocopter ES-120 helicopter took off from JSC SMU-310 helipad in airfield "Rzhevka". Car the director general of the specified company 42-year-old Artem Vasilyev operated, onboard the helicopter could be to four people, reports AN «Operative cover».

The helicopter headed for Solovyevo’s settlement of the Priozersk Area of Leningrad region, but on the destination did not arrive. Time thus made Podletnoye only 25-30 minutes. Next day, on May 14, with the statement for search in police addressed deputy Vasilyeva.

For the helicopter search in Vsevolozhsk and Priozersk the Areas of Leningrad region. According to the law enforcement agencies, the interrogated inhabitants of the settlement Zaporozhye of the Priozersk area reported that in the evening on May 13 saw any helicopter which is flying by over this settlement.