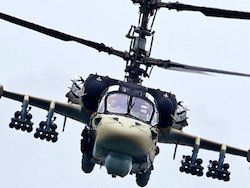 The Ministry of Defence of Russia signed the contract for delivery of 32 perspective deck Ka-52K helicopters, reports ITAR-TASS referring to a source in defense industry complex. New helicopters will be a part of aviagroups of two under construction in France for the Navy of Russia of the vertoletonosny landing ships docks of the Mistral type.

Progress Arsenyev Aviation Company of a name of Sazykin will be engaged in construction of helicopters. It is supposed that on each of new helicopter carriers will be based on 16 helicopters of the Ka-52K type. Earlier it was supposed that into structure of aviagroups of "Mistrals" will enter on eight deck Ka-52K and eight transport and combat Ka-29TB helicopters. The holding «Helicopters of Russia» of the order for production of the last yet did not receive.

About intention of the Ministry of Defence of Russia to sign in 2014 the contract for delivery of 32 Ka-52K helicopters it became known in October of the 2013th. Then the deputy minister of defense of Russia Yury Borisov told that Ka-52K in 2014 should pass the final stage of tests. Thus he noted that the order for cars of this kind can be placed only after completion of tests.

Production of prototypes of Ka-52K is carried out from the middle of 2012, and tests of new helicopters was planned to carry out onboard the aircraft carrying cruiser «Admiral of fleet of the Soviet Union Kuznetsov».