The U.S. Air Force will get the new king among helicopters 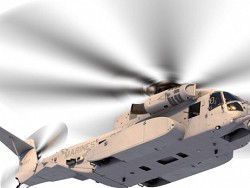 The CH-53 King Stallion model is the last Stallion in a ruler. The helicopter was constructed by the American enterprise Sikorsky for the case of marines of the USA, and it will replace the CH-53E Super Stallion model.

In a development stage within nearly ten years, engineers from Sikorsky finished a design of this superheavy helicopter and added a number of the latest features. For example, now King Stallion is equipped with three General Electric T408 engines in capacity of 22 500 horsepowers. For comparison, the CH-53E Super Stallion model was equipped with T64 engines which was given out only by 13 140 horsepowers.

King Stallion can transport now to 55 infantrymen and thanks to the increased dimensions in a landing compartment now it is possible to transport the easy armored machinery corresponding to a jeep of Hamvi on the size. Also the helicopter is equipped now with system of protection of the engine from sand and a dust under the name Engine Air Particle Protection System. It considerably expands possibilities of the new transport helicopter.

The latest helicopter possesses a large quantity of pluses. But the most essential shortcoming is its price. 145 million dollars for unit. For comparison, the previous model in a ruler costs 34 million dollars (and it taking into account inflation). However, despite high cost, the U.S. Air Force plan to buy 200 helicopters.