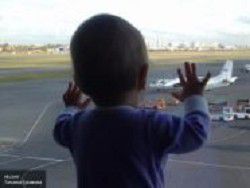 The federal news agency already wrote, with what pleasure some thousand Ukrainians on news about falling of the Russian plane flying from Sharm el-Sheikh to St. Petersburg responded. Unfortunately, this wave of scepticism and mockeries was not limited to Ukraine: Internet trolls reached even pages of victims in social networks and leave comments to the last records about the last rest of passengers of the ill-starred plane.

Photos of victims at crash scatter on a social network of "VKontakte" in thousands and in tens of thousands. In the majority those who репостит or makes comments on a photo and records, tries to condole thus, but also for themselves food Internet trolls here found.

Perhaps, the photo which has been laid out by the passenger of the plane by Olga Sheina became the most popular. On a photo her husband and the small daughter on a plane ladder is represented, and the signature to a photo reports: «We fly home». Last time Olga was in a network at 6.40.

"Arrived", – writes Ale Kaminsky, having added to record a smile laughing to tears. «As have a rest?» – scoffs Alexander Wolf. In reply to remarks of other users of a social network of the girl arrange "cheerful" skirmish: «Ale, we take off!» – «Ur, a creek!» – «Good afternoon, you the airline welcomes «Reach live».

«At it on erased there is no inscription that they broke», – with impudent scepticism Taulan Shabatukov (the spelling and a punctuation of the author are kept) ascertains.

«Well at last I waited)) holiday!!! Farewell cold Russia!!!!» – other passenger of the plane, Anastas Bogdanov (the spelling and a punctuation of the author are kept) rejoices. «It is pleasant to have a rest, Nast», – wishes somebody Angelin Letov after that as there is information that the plane broke.

«Never thought that Egypt will cause in me so many positive emotions», – other passenger of the plane Victoria Sevryukova shares. «And never thought, what you will die in 24 years?» – Maxim Frint (his page, is by the way, already blocked) gloats over.

Neither tragedies of certain people, nor all situation as a whole did not find a response in the hearts of some users of VK.

«My God, many planes broke and before. And you something did not suit similar mourning», – Darya Maksimova notes.

However, sane and not such stale people nevertheless it appeared much more. Presented condolences and those wished «fluffy oblachok» for "angel" who репостнул the last record of young mother and happy wife Tatyana Gromovoy. On a photo her decimestrial daughter Darina before a departure from Pulkovo is embodied. Signature: «Main passenger». In a plane crash all young family was lost.

The lost Olga Sheina’s relative of which it was a question right at the beginning, allegedly the father, Oleg Dushechkin, laid out on the page the last photos of a family with the signature: «You forever in our hearts (((I always with you». People – familiar and neznaokmy – left to record of one and a half hundred comments. The majority of them are reduced to only two words: «We condole. Krasnoyarsk», «we Condole. Belgorod» etc. The tragedy did not leave indifferent people from all Russia – from St. Petersburg to Magadan.

The federal news agency brings the condolences to relatives and friends of victims.