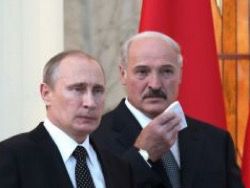 How allies will overcome disagreements on the Russian air base in Belarus?

The State Office of Public Prosecutor of Belarus revealed violations in ensuring safe operation of the main gas pipelines lying on the territories of the country.

During check in the territory of the Minsk area it is established that some buildings and structures are in dangerous proximity to the main gas pipelines belonging to JSC Gazprom TransGas Belarus.

Whether can dictate official Minsk the conditions to the gas monopolist?

– At the Belarusian management which has settled resources for maintenance of present social model, dependence on Moscow increased, – notes политологАлександр Klaskovsky. – Therefore in the short term, hardly, Minsk intends to apply any drastic measures concerning "Gazprom", and especially, to fuel tension with the Kremlin.

According to the expert, Moscow now too not from a hand quarrels with Minsk as Russia is in a difficult intra economic and foreign policy situation.

The political scientist considers that disagreements between allies can arise because of expected Russian air base in the territory of Belarus.

It reminds that Alexander Lukashenko already made about it a number of sharp statements.

– It is not excluded that there will be any bargaining. Probably, Moscow at the expense of credit allocation, or subsidies will try to push an air base question, – the political scientist predicts.

However, if Lukashenko persists, that, according to the expert, the compromise option is possible: Russia will give aviation equipment to the Belarusian pilots, or the mixed aviapart will be created.

In any case, as the analyst emphasizes, this problem, most likely, will be discussed in a lobby.

– The questions of principle are discussed behind the scenes, confidentially two presidents. Outwardly, it seems, everything is quiet, and actually, maybe, the next conflict already bubbles, – the analyst believes.

– Lukashenko completely owns a situation within the country. It finally crushed opposition. The people are dissatisfied with fall of a standard of living. But while this level is not so low yet that the discontent poured out in any forms of a mass protest, – the political scientist emphasizes.

In his opinion, Lukashenko’s economic problems hopes to solve by means of Moscow, and also the IMF credit. The analyst reminds that the head of Belarus, is not going to carry out reform.

– Crisis not so strongly pressed the authorities that they feverishly looked for a non-standard way out. Above while stake on former command and administrative model of economy, – Alexander Klaskovsky emphasizes.