Why to China 24 Russian fighters Su-35 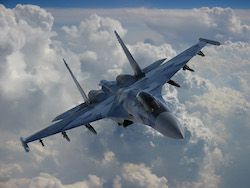 On air of Radio "Komsomolskaya Pravda" discussed the conclusion of the contract between Russia and China on delivery of the multipurpose fighters Su-35.

Russia will deliver to China 24 fighters Su-35. Cost of each of the sold cars will make about $83 million. And total amount of the transaction is estimated at $2 billion. The fact of signing of the contract was confirmed already by the general director of Rostekh state corporation Sergey Chemezov. There is a question – why to Chinese who have also the aircraft, our planes? And then, they can buy one sample and make a copy. Our military observer Victor Baranets explained a situation on air of Radio "KP":

– The aviation industry of China is loaded by other products, they any more do not have capacities. And Chinese, very economical people, counted that will buy planes of this kind much cheaper, rather than to open the line for production of planes of this kind. There is one more curious moment. Cunning Chinese told: yes, we are ready to buy from you Su-35, but we will try to put in this plane the avionics. We, naturally, refused. Why refused? Because behind plane there should be the Russian aviation support.