The Mi-28NE helicopter for Iraq 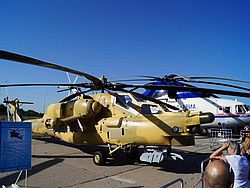 At the air show which have taken place on July 1, 2014 in Rostov-on-Don in honor of the Rostvertol plant 75 anniversary two fighting Mi-28NE helicopters, made for Iraq (officially the customer was not called) for the first time were noticed. Helicopters bear two-ton yellow camouflage coloring without any identification marks and are not equipped with nadvtulochny RLS N025E.

As it was already reported earlier, in the annual report of JSC Rostvertol for 2013 (Iraq) 28 fighting Mi-35M helicopters and 15 fighting Mi-28NE helicopters is told about performance by the enterprise of contracts for delivery to "inozakazchik K-8". Contracts were signed by JSC Rosoboronexport in 2012-2013. Iraq became the first foreign customer of Mi-28 helicopters.

First four Mi-35M of production of "Rostvertol" under these contracts were delivered to Iraq in November, 2013. In 2014 these four Mi-35M helicopters were involved by army aircraft of Iraq in operations against Islamists, and at least one helicopter is already lost. On July 1, 2014 the agency of ARMS-TASS reported about allegedly taken place delivery to Iraq to the following party of fighting helicopters as a part of four Mi-35M and three first Mi-28NE, however confirmations to it while are absent. It is possible that two Mi-28NE helicopters shown on July 1 in Rostov-on-Don are actually the first, made for Iraq.