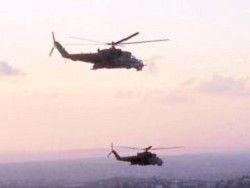 In the Syrian province of the Boor Bashar Assad’s opponents brought down two helicopters. As the Israeli newspaper Haaretz reports referring to one of the Syrian groups, speech can go about helicopters of the Russian Air Force.

Besides, information, at least, about one brought-down helicopter is confirmed by the Syrian Observatory for Human Rights organization according to which incident occurred near the city of Kafr-Nabuda to the North from Boors.

In turn, fighters argue that the second helicopter was brought down by an anti-aircraft missile, when came in the land to land a landing.

As notes RBC Ukraine, the Russian and Syrian representatives yet do not make comments on this information.

It is necessary to consider that in the conditions of being waged round the conflict in Syria of information war of nerves many messages on achievements, defeats and losses from this or that party do not prove to be true subsequently.