Posted by admin in Military on December 4, 2015 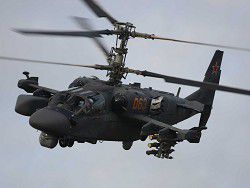 According to the representative of department, helicopters "already in shops. Since April delivery to their military acceptance and delivery in armies" will begin.

"This year according to the plan we receive 16 Ka-52 helicopters. They already in shops. Since April delivery to their military acceptance and delivery in armies" will begin, – told following the results of Progress plant visit Borisov.

He noted that the Ministry of Defence of the Russian Federation builds work with plants so that ordered production went to armies within a year rhythmically, instead of "fell down under the end of the year – in November, December". The quarterly schedule of delivery of helicopter equipment is for this purpose realized.

In turn the managing director of "Progress" Yury Denisenko assured the deputy minister that all obligations to the Ministry of Defence, "is doubtless, will be executed". He reported that the long-term contract with the Ministry of Defence of the Russian Federation provides delivery of the Air Force of Russia till 2020 of 146 Ka-52 helicopters.

Also, according to Borisov, the holding "Helicopters of Russia" develops the ship version of the Ka-52 helicopter – Ka-52K, the Russian military department is interested in success of this developmental work.

"First, the landing ships, and such helicopter as Ka-52K will be demanded by the ships of our surface fleet already are under construction. So to connect the completion of skilled design work on this helicopter with delivery or not delivery of "Mistrals" it would be wrong", – emphasized Borisov, answering a question, whether ship Ka-52K application in the Navy of Russia if the French helicopter carriers are not put will find.

He noted that service conditions of helicopters on the sea essentially differ from land therefore additional improvements regarding used materials and accessories were required.