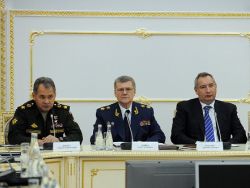 Having carefully counted up billion rubles, popilenny and mastered in JSC Vertolyoty Rossii structures, the Prosecutor General’s Office of the Russian Federation suggested to scold its management.

The concept of development of ship structure of boundary bodies the president of Russia Vladimir Putin charged to develop FSB still on January 16, 2006 in an assignment No. 169, and on February 2 the same year its instruction confirmed the government of the Russian Federation in resolution No. SI-P4-34C. Besides other, the concept provided also acceptance on arms of the latest ships of the frontier protection equipped with easy helicopters.

The ships of the project 22460 were developed in time and since 2010 started to arrive on arms of frontier guards. Now in their system already 4 of 25 planned, and, probably, ship builders even will keep within the plan providing completion of construction of all series by 2020. Where business with helicopter which should develop JSC Kamov on the basis of existing Ka-226 with the subsequent manufacturing of 80 cars worse is. Development of the helicopter is broken, the contracts signed with JSC Kamov, are terminated.

Say that the same destiny waits the Russian-Chinese project of modernization and production of a transport gelikopter of Mi-26. The same reason that on "Kamov" where for some years could not create the helicopter with characteristics demanded by the customer: total lack of the shots lost for Yeltsin and Putin decades which, as we know, solve everything.

The Russian-Ukrainian conflict which even contrary to will of the Kremlin pushes Russia on strain of relations with the West, compelled a power vertical will ask a question of theft and disorder scales in defense industry. It also caused checks of state corporations going now among which JSC Vertolyoty Rossii which has recently become object of attention of the Prosecutor General’s Office is especially allocated loved by the minister of the industry of the Russian Federation Denis Manturov.

Having familiarized with excerpts from representation of the State Office of Public Prosecutor which we published in article «Father’s sonnies of aviation industry-2», any can estimate degree of disorder of the branch reached under the direction of mister Manturov. Let’s comment on the most significant in our opinion the moments and figures.

In "Representation" it is said that the outstanding debt involved with the enterprises of helicopter holding as of December 31, 2013, made 196 billion rubles, and the debt on the credits is often extinguished by means of attraction of the new. But same the classics of a genre called by "a financial pyramid»! It is remembered, the founder of a pyramid the "MMM" Sergey Mavrodi even got into prison – organizers budgetary «a helicopter pyramid» still stay on freedom and even are well well-fad.

Let’s add that, unlike Mavrodi, they dispose not of money of the swindled cheapskates. JSC Vertolyoty Rossii received in management the state property in the form of industrial assets, and also redeemed in existence of this sharashka for the budget money received from the state as payment of infinite additional share issues, JSC UIC Oboronprom is put and repawned long ago for the sake of attraction of these credits. Which can be at any time demanded, and in whose hands then there will be the Russian vertolyotostroyeniye, it is not known.

Further in the document it is said that essentially new models of helicopters during activity of «Helicopters of Russia» it is not created, the main works on development of the available modernized models of helicopter equipment were carried out even before its creation. That is tasks for the sake of which performance joint stock company is created, are not solved, and its structures are used with a view of pumping of budgetary funds under absolutely left programs.

«Since 2002 development of the helicopter of civil purpose of Mi-38 for which only for the last three years the holding spent more than 4 billion roubles was conducted, however any contract for delivery of the called model of the helicopter so far is not concluded».

For the State Office of Public Prosecutor it is news though about hopelessness of this helicopter it is possible to read in open sources, such as our previous article from a cycle «A vertical on helicopters». The same touches also Mi-34C on whom it is spent 680 million rubles, but it is not finished to a stage of industrial production. The project was closed by JSC Vertolyoty Rossii decision from April 9, 2012. That is, or the management has no brains and it spent money for nothing (negligence), or money simply stole and wrote off it on the closed project (plunder in especially large sizes).
The imposing mentioned in representation fictitious «paid services» from «Helicopters of Russia» too is not news. About these frauds we wrote at the beginning of 2013 in article «A vertical on helicopters-10». The prosecutor’s office only specified figures – 3,6 billion rubles.
Besides, for 2011-2013 Manturov’s favourite office extorted from the enterprises as dividends of 10,6 billion rubles from which 1,7 it is given to the same idlers from "Defence industry". Here this fraud needs to be considered especially: the matter is that initially the part of actions of the enterprises which were transferred in JSC Vertolyoty Rossii, was in a state property. Other part was redeemed on budgetary funds which downloaded in JSC Oboronprom by means of buying up by the Russian budget already actions of the most manturovsky design. And subsequently these resources went on buying up of actions of the enterprises in the market. That is all industrial assets from which "Helicopters" receive unknown dividends, are state, and, means, these 10,6 billions should be transferred into the budget.

Before transfer of state blocks of shares to a shop so it also was, and now money is lost in its subsoil that too suggests an idea about the grandiose drank. And the fair part popilenny, by recognition of the State Office of Public Prosecutor, is spent for a salary to company management, various additional payments, gifts and entertainments, such as 8 million the rubles which have left on the organization of viewing by workers of musicals "Chicago" and "Little Mermaid". Such care on familiarizing of staff with art touched me to depth of soul, but «Helicopters of Russia» to separate to "effective managers» are even more careful. For example, Arthur Shtankov who has not worked and year by the managing director entering in «Helicopters of Russia» JSC Vertolyotnaya servisnaya kompaniya, obtained reward on leaving at a rate of 9,6 million rubles.

And how many millions are mastered on trade in spare parts which «Helicopters of Russia» do not make? At us about it it is possible to read in article «A vertical on helicopters-5», and in the public prosecutor’s document it is said that they wind more than 20 %, and another 20 % moreover were sucked away through earlier headed by Shtankov «Helicopter service company».

After obtaining the similar document, to the chairman of board of directors of «Helicopters of Russia», to the former governor of Cамарской of area Vladimir Artyakov in an amicable way it is necessary to make the right decision about shop dissolution, an institution of criminal cases on its management (former and present which observes continuity) is unique, and most (if all попилили without it) to look for other work. But while anything similar does not occur, and the 1st Deputy Prosecutor General Alexander Buksman, having in detail described multi-billion assignment and squandering of public funds, suggests to scold his organizers, and Manturov’s surname is not mentioned at all.

However, citizen Buksman can be understood. If our bodies for so many time cannot send on put to it under the law a place of defensive minister Serdyukov with the girlfriend, than worse it the commercial and industrial colleague?