Whether it is dangerous to fly to Central Asia 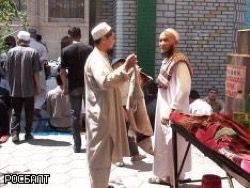 The Russian airlines received the list of the countries from Rosaviation, when flying in which it is recommended to observe special security measures. All five states of Central Asia which hardly so are dangerous from the point of view of terrorist threat are included in it also.

Actually, at least today, all states of this region, from the point of view of terrorism threat, are much less dangerous, than, for example, Russia. So, in the report of Institute of economy and the world "A global index of terrorism 2015" all sredneazitasky states were included into the list of the countries with low "terrorism influence". In the made rating Kazakhstan takes the 83rd place, Tajikistan – the 84th, Kyrgyzstan – the 86th, Uzbekistan and Turkmenistan – divide the 124th. Than farther from the first place, subjects "terrorism influence" is less. Danger of terrorism in Russia is much higher, it in a rating on the 23rd place, and Ukraine at all on the 12th.

I will add also as the person repeatedly happening in Central Asia, as the crime in the region is much lower, than in the Russia. However, in Uzbekistan certain "danger" to the Russian tourists is represented by local militiamen who unmistakably calculate visitors and start to extort under different far-fetched pretexts from them a bribe.

That is especially offensive, militiamen extort money only from visitors from the CIS, and here the western tourists (though they and it is essential more richly) to touch to be afraid. It is thought that if the Russian authorities charged to embassies to protect really abroad the compatriots, these cases of extortion would stop.

Certain troubles of our tourists can expect and in Kyrgyzstan. "Incessant" revolutions in this state led to formation of a layer of young, eternally semi-drunk outcasts which wish to plunder and simply to offend the visitor. However, unlike the Russian robbers, these people it is impossible to call "professionals": attacking, they, as a rule, and are afraid, so at some determination and preparation it is quite possible to beat off from them.

The C points of view of the potential danger proceeding from religious extremists, are more vulnerable those countries where the population is rather religious. Nomads in the recent past – Kirghiz, Kazakhs and Turkmens, as a rule, observe Muslim ceremonies only at household level. In Uzbekistan and Tajikistan religiousness of the population is much higher, and here, at least the 90th last century, was sufficient activity of the Islamic radical organizations is high. But today, as cynically it sounds, "anti-democratic character" of the Uzbek mode, for example, led to that all Muslim "extremists" here if can state the opinions, only in prison cells. At liberty intelligence services and militia carry out total control of the population.

At first sight, a little more dangerous situation in Tajikistan. It is the country endured long and bloody civil war, and one of warring parties acted under a green banner. And in 1998 in the mountain area of the republic where fighters Islamists acted, even the foreigners working in mission of the United Nations were killed. However, actually, murder of foreigners was carried out not for political reasons: someone started up hearing on kishlaks that members of UN peace-keeping forces go with the suitcase filled by dollars.

Moreover, even during civil war of foreigners Tajiks did not touch, "preferring" to kill each other. And it concerned not only "untouchable" journalists (warring parties even competed who can accept reporters with big hospitality), but also tourists thrill-seekers. Personally I know several inhabitants of the European countries traveling on bicycles (!) without any problems across Tajikistan during operations.

It is possible to argue on, whether there was a recent mutiny in Tajikistan "Islamic" or not, however its fast and effective suppression shows, who here today "rules ball". Generally, Emomalii Rahmon in the republic supervises a situation.

Even in mountain southeast regions of the country (a traditional ancestral lands of Islamic opposition) a situation simply on an order stabler than, say, in the North Caucasian republics of Russia. Certainly, in case of mass break of fighters from Afghanistan, the situation here can and be destabilized, but, at least while, the probability of such succession of events is very insignificant.

The Kirghiz part of Fergana Valley where a few years ago there were bloody fights between local Uzbeks and Kirghiz can represent a certain danger to the Russian tourists. Uzbeks here make population about a half, and many of them sympathize with the Islamic radical organizations. Moreover, escaping from "karimovsky terror", many extremists from Uzbekistan here got over. The liberal policy of Bishkek led to that the Islamic radical organizations felt here much more freely, than in the next republics. It is possible to argue on, whether such softness of the Kirghiz authorities, however years of a distemper was justified and mezhdusobitsa in the republic even more strengthened potential danger of Islamic radicals in this region. Let’s remind that well-known "the crying terrorist", rushed on the tank in an arrangement of the Syrian army, came just from the Uzbek kishlak in the south of Kyrgyzstan.

But the Kirghiz part of Fergana Valley is nevertheless only small part of Central Asia, and without visit of this region it is quite possible to manage. Well, and as to the prevention to airlines – in such business vigilance superfluous does not happen. On "milk" already burned.