Britain sent fighters for interception of bombers of the Russian Federation 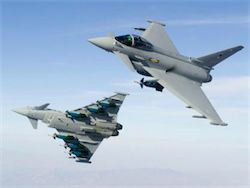 From the territory of Scotland the fighters "Typhoon" for support of two Russian bombers near the British air space over the Atlantic Ocean rose. It declared in the Ministry of Defence of Great Britain, предеает "Itnterfaks".

«Typhoon planes rose from Air Force base in the city of Lossimut by interception of two Russian Tu-160 which was flying by in the British region of interests in the international air space over Atlantic, and remained with them while they did not leave this space», – the representative of defensive department told. According to him, flight passed on Thursday evening.