Whose tail twirls by the Dog? 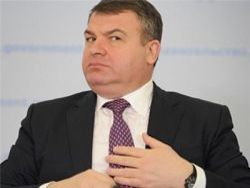 Over the Sinai Peninsula of Egypt the civil plane broke. Any aviation accident – neither in the USSR, nor in the Russian Federation – did not carry away so many human lives, as this. And again experts say about old planes, that the lost board fought 15 years ago a tail about a vzlyotny strip, and on its steering plumage even in the summer of this year the huge crack which recently painted over gaped.

It would seem, all – arrived. To suffer such situation in civil aviation industry it is impossible more. Where our new planes? Why aircraft factories stand idle? Where the real organizers of aviation production, instead of the swindlers manipulating cash flows under cover of state corporations? Instead as if cold water of all poured: the suspect of multi-billion plunders from the Ministry of Defence, amnestied under the Victory 70 anniversary ex-Minister of Defence Serdyukov is appointed the industrial director of Rostekh state corporation. To it aviation assets of state corporation with revenue almost in 350 billion rubles a year are transferred. It and «Helicopters of Russia», and the Incorporated dvigatelestroitelny corporation, and modular plants, and is a lot of that else connected not only with aircraft, but also space.

Let’s remember for a start that the general at this person with aircraft. It appeared – anything. No, something is: tried to disband flight groups "Strizhi" and «Russian heroes» of which the country is proud, and to close Academy of military space defense in Tver.

It is curious that for feeding Serdyukov received the new place right after an exit to freedom from the former Vasilyeva’s subordinated from thievish "Oboronservice" jails. That Serdyukov’s Vasilyeva’s silence of rather possible role in financial frauds was allegedly estimated at the Ministry of Defence on the top is known also. So soon and it can be пригрета on Rostekh’s lush glade. By the way, to arrange such pleasure to the former persons involved in criminal cases, from this position expelled professional aviation expert Alexey Fyodorov. Having specialization after Irkutsk Polytechnic University «mechanical engineer of aircraft construction», he before work in Rostekh directed United Aircraft Corporation while there did not send Pogosyan, and also the well-known aircraft manufacturing corporation "Irkut". There do well-known Su-30CM, fantastic the Yak? 130, develop the new civil MS-21 plane. In a word, the person was on a place in Rostekh as the curator of aviation industry. But threw out it from there, without reflecting. Replaced with the former dealer in furniture and the expert in the taxation in what to it was not equal – it painfully well operated financial streams.

But there is in this history both more unclear and mysterious aspect. It appeared that purpose of the largest in recent years «national allergen» Serdyukova took place in full ignorance of Presidential Administration. Here that her head S. Ivanov declared RIA Novosti news agency: «You that think, what in the Kremlin paint each state corporation, whom where to appoint, whether that? We too learned about it from mass media».

Such statement is twice strange, as Mr. Ivanov himself was Minister of Defence and it knows, how money accustomed to defensive department at Serdyukov. Into its present duties enters, that even governors and ministers with their deputies passed through a Presidential Administration sieve. And it is correct – under these people tens of billions state rubles turn. Under Serdyukov there will be hundreds billions. And not to notice?

And here that at once occurs. Our president V. V. Putin is indeed completely shipped in the organization of resistance to the world evil. To that that pushes the whole world in chaos. It angrily already launched the third world war, and stop it can only Russia and its wise president. What here, is asked, Serdyukov? Unless it is possible to distinguish from height of a world political Olympus of the thievish microsubject of economic activity? Our leader simply has no time to glance in an eyepiece of an electronic microscope and to see that in perimeter of separately taken state corporation.

If to remember with what we began, – about aircraft, just the same «gray and thievish» did not start up in the sky the aircraft engine NK-93 which has outstripped time, ruined behind high walls of the stopped aircraft factories the certificated Tu-334 plane, declared not necessary for the huge country shirokofyuzelyazhny Il-96, do not put in production regional Il-114. It they – invisible from a political Olympus even in a microscope – hristenka, сердюковы, мантуровы and погосяны should be responsible for death in the poor Sinai desert of hundreds people.

And where exit? How to direct just anger of mister not only on the world evil? The tool was thought up by him. It is the All-Russian popular front. His members are simply obliged, as if Russified Chinese хунвейбины, to resist to the corporate official evil and to make though one good deed while about "front" will not forget because of inoffensiveness and uselessness.

While they are afraid. Are afraid, though "veterans". Edition addressed to them even in writing – are silent. Everything dumped on the president. But Serdyukov not one. A name to it – a legion. It is old, as the Bible, history. When Jesus expelled a demon from the person in the city of Gadar, told to a demon – «leave, spirit dirty, from this person. Also asked it: how to you name? That also told in reply: a name to me a legion because there is a lot of us».

"Veterans" idolize Putin, as Jesus Christ’s first Christians. So help it for that wait?.