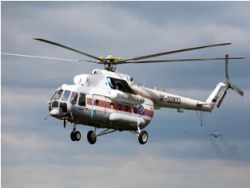 The Mi-8 helicopter which was gone in Tuva on October 10, 2014, most likely, broke about a mountain slope. The head of the press service of Control center reported about this TASS crisis situations of regional government of the Ministry of Emergency Situations Dmitry Kryzh.

According to him, accident occurred at height about 2,6 thousand meters above sea level. «There very big bias – about 45 degrees», – was specified by him. The representative of the Ministry of Emergency Situations noted that from the helicopter there was only a tail beam and an engine reducer. «It is not excluded that at crash there could be an explosion», – added Kryzh.

The representative of the West Siberian investigatory management on transport of Investigatory committee of Russia (SKR) reported earlier that on fragments of the helicopter ignition traces were found.

On August 8 the head of the republic Sholban Kara-ool confirmed the fact of detection of fragments of the Mi-8 helicopter. On a crash place remains of ten people also were found. According to him, the crew and passengers had no chances. «The tragedy nevertheless occurred. Let’s declare mourning as soon as we will find out destiny of everyone», – he declared.

Pieces of metal were found on August 7 on a ridge slope in riverheads of Ulug-O on border of Kyzyl and Todzhinsky areas. The experts who were carrying out an avialesorazvedka, saw fragments with an inscription «Tyva the Avia». To the area of probable accident the operative group of Head department of the Ministry of Emergency Situations on the republic was put forward.

The Mi-8 helicopter belonging to the company «Tuva airlines», in the morning on October 10, 2014 carried out flight from the settlement Sorug to Kyzyl. At the scheduled time it did not contact. Onboard the car, according to Rosaviation, there were 14 people.

On the same day searches began with air during which for the entire period 168 flights were made and more than 70 thousand square kilometers of the territory are surveyed. With arrival of winter it was necessary to interrupt operation. In the summer searches renewed. Works became complicated a mountainous terrain of the district.