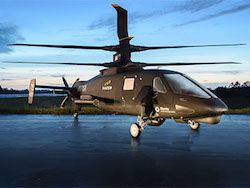 The American company Sikorsky carried out tests of the auxiliary power plant of the perspective high-speed S-97 Raider helicopter scout, reports Flightglobal. It is a question of start of the installation mounted on a flight prototype of the helicopter; before check of all onboard systems of the device were carried out only when using an external source of power supply.

As expected, in next few days of Sikorsky will carry out test start of the main engine of the Raider helicopter rotating coaxial main screws and the tail pushing screw. After check of the main Sikorsky power plant plans to lift Raider in air. According to the American company, one prototype will take part in flight tests. Now construction of the second prototype which will be used as the demonstrator is conducted.

Public demonstration of the first prototype of Raider took place at the beginning of October, 2014. The weight empty S-97 makes 4,9 tons. The helicopter constructed on the coaxial scheme with pushing screw in a tail part, can gather speed to 220 knots (about 410 kilometers per hour). The car will be equipped with various types of arms and prospecting equipment.