Posted by admin in Helicopters on January 5, 2016 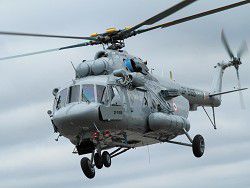 The Kazan Helicopter Plant (KVZ) entering into holding «Helicopters of Russia» (UIC Oboronprom subsidiary as a part of State corporation Rostekh), let out the anniversary 7500th helicopter of Mi-8/17 family.

This helicopter is let out in military transport Mi-8MTB-5 option and will be transferred according to the contract to Military and air forces of Russia. The holding press service «Helicopters of Russia» reported about it.

Over 12 thousand helicopters of Mi-8/17 family which are delivered to customers more than to 100 countries of the world are so far let out. Today on KVZ there is a mass production of three main updatings:

Mi-8MTB-1 (the export version – Mi-171B) – multi-purpose updating on the basis of which helicopters of different function, including flying hospital are issued;

Mi-8MTB-5 (the export version – Mi-17B-5) – military transport updating (the helicopter is intended for cargo transportation in a cabin and on an external suspension bracket, it can be used for rescue operations and also bear arms);

By expert estimates, under condition of continuous improvement helicopters of Mi-8/17 family can remain leaders in the niche of 15-20 more years. Mil Moscow Helicopter Plant design office (MVZ), the developer of the helicopter, and KVZ entering into holding «Helicopters of Russia», are engaged in improvement and modernization of helicopters of the Mi-8/17 type. Now the program of stage-by-stage modernization of Mi-17B-5 and development of a series of the helicopter with a big reserve for the future which becomes new Mi-171A2 is accepted.