Reuters: the helicopter of mission of EU broke at the airport of Pristina 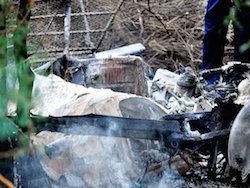 The helicopter of mission of EU broke at city airport Pristina in the self-proclaimed republic of Kosovo. As Reuters reported, as a result of incident there are victims. Information on victims while are not present.

"The helicopter of mission of the European Union in the field of rule of law in Kosovo (EULEX) broke at the airport of Pristina. There are victims, we specify details", – the representative of NATO declared to agency.

According to local mass media, because of incident the airport is temporarily closed. At the same time, according to the correspondent. The TASS in Brussels of Asya Arutyunyan, as a result of state of emergency wounded one person. About it reported the European source. "Yes, there was an incident to helicopter. According to the preliminary information, one person is wounded", – the diplomat told, having added that all details now are specified.