Posted by admin in Aircrafts on February 7, 2016 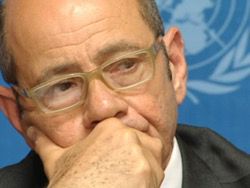 The official representative of office of the United Nations in Geneva Ahmad Fauzi declared that falling of Russian Su-24 in Syria can complicate fight against terrorism in the territory of the Syrian Arab Republic. About it reports RIA Novosti news agency.

«I in a course that the Russian plane as it is reported in the mass media, brought down by Turkey, can complicate a situation», – he emphasized.

Before November 24 of the Ministry of Defence of Russia reported that the front bomber most likely was brought down as a result of attack from the earth. In department argue that the aircraft was only over the territory of Syria that is fixed by data of objective control. According to available information, two pilots it was possible to catapult. Their destiny is investigated now.

In the Kremlin thus emphasized that the exact reasons of falling of Russian Su-24 still are not called.

Meanwhile the Turkish General Staff extended the statement in which it is said that the fighter F-16 Air Force of the country brought down the plane which has broken air space of Turkey near the province Hatay Yayladagy. In department note that to it 10 preventions were made. Thus, as reports Reuters referring to the representative of the Turkish authorities, at the same time by plane of border of Turkey broke one more aircraft.