Posted by admin in Aircrafts on February 9, 2016 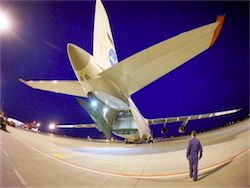 By order of the General Staff pilots in large quantities throw people and equipment on ranges of the Central military district.

The re-deployment goes within sudden check of fighting capacity which to TsVO armies, paratroopers and transport aircraft the Supreme Commander arranged. From Ulyanovsk to the Urals and to Western Siberia fly ten Il-76 with divisions of the 31st landing and assault division. Having overcome by air one thousand kilometers, winged infantrymen will start to prepare for performance of educational and fighting tasks on Chebarkulsky, Yurginsky and Totsky ranges. Exactly there in the next few days there will pass an active phase of doctrines of the 2nd and 41st general armies of the Central military district where paratroopers should act together with overland parts.

Slightly earlier military transport planes delivered from Ivanovo in TsVO staff and equipment of the 98th air and landing division. From landing airfield to the range, – and it is more than hundred kilometers on a cross-country terrain, the column moved under the own steam. Right there to throw paratroopers into educational fight generals, apparently, do not plan. At first soldiers and officers will need to develop field point of management in the area appointed for them.

The same temporary staff, more precisely, mobile point of management of Airborne troops today sent to the Urals from air base situated near Moscow Chkalovsky. For a transfer of all equipment and people, including operative group of command and the military personnel of a separate regiment of communication, are required about ten transport Il-76. According to the deputy commander of airborne forces Andrey Holzakov, from this mobile point generals will direct actions of winged infantry. On the forthcoming doctrines paratroopers yet do not know the specific objectives. "Now all sudden checks are carried out in such a manner that a task give on a place. We are ready, at us with ourselves all necessary, including complexes of an automated control system of airborne forces "Andromeda-D" which reduce decision-making time", – Holzakov explained.

This ACS represents a complex of an automation equipment with which equip stationary and mobile points of management. It created taking into account features of airborne forces as high-mobile type of military forces. In particular, it is adapted for loading in the plane, flight and a desantirovaniye. "Andromeda-D" provides the effective management of divisions a mode of real time in any conditions of a situation. For example, on the strategic doctrine "Caucasus-2012" with its help generals ordered landing parts from distance more than 1500 kilometers. The complex can be mounted on the chassis of a dvukhosny Kamaz, BTR-D, BMD-2 or BMD-4. Besides it is successfully tested for compatibility with ACS of Land forces.

Today heavy military transport worker An-124 "Ruslan" in two calling delivered from air base "Tolmachevo" (Novosibirsk region) to airfield of "Koltsovo" near Yekaterinburg eight partially disassembled helicopters of fire support of Mi-24. In such quantity by air still anybody and never forwarded rotary-wing cars.