To the place of falling of Mi-8 all-terrain vehicles

Posted by admin in Helicopters on February 17, 2016 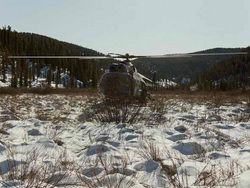 Two all-terrain vehicles reached a place of crash of the Mi-8 helicopter in the Nenets autonomous region. Victims will be taken to hospital Naryan-Mar.

All-terrain vehicles transport victims on a helipad of an oil field of Trebsa-Titov, from here the helicopter will transport people in hospital of Naryan-Mar.

As it was reported, during rigid landing of the helicopter the two people, one passenger and the conductor were lost, five were traumatized different severity.

Staff of the Bashneft Pole enterprise, rabtayushchy on a field Trebsa was passengers of the helicopter.

According to preliminary data, the engine failure or adverse weather conditions could be causes of accident.

Check of performance of the legislation on safety of flights is checked by the Arkhangelsk transport prosecutor’s office.