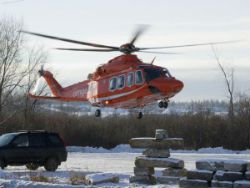 The death of crew of air ambulance of Ornge lies on conscience of the company.

Against the Canadian company Ornge providing services of air ambulance, 17 charges in connection with helicopter crash in northern Ontario are put forward a year ago. Failure led to death of four employees. According to messages of some local mass media, charges were shown at the beginning of this week according to standards of the Canadian Labour code.

Soon after midnight on May 31, 2013 the Sikorsky S-76A helicopter took off from Musoni’s airport about James’s gulf and Attavapiskat First Nation went to an emergency place in the area. The aircraft broke approximately in two kilometers to the northeast from the airport.

According to CBC edition information, as the conclusion of charge affirms that the service Ornge allowed to operate to pilots of the company S-76A helicopter «without appropriate preparation for operation of it such as aircraft», did not provide them «the means, allowing to provide visual management in operating time at night» and that captain Donald Mark Filliter had «an insufficient experience of carrying out night operations».

According to the charge version, at the moment of accident Filliter did not pass complete check of the professional skills. Besides, in the document it is emphasized that, having resolved Filliter and his first assistant Jacques Dupuis to fly together, Ornge broke the principle forbidding to two unexperienced pilots to carry out joint tasks.

Any of these charges was not proved. In the statement the Ornge company confirmed that received the summons. «Ornge considers now materials cases. We do not make comments on a possible outcome of trial», – it is noted in it. Representatives the company also assured that they constantly cooperate with the Ministry of transport of Canada for the purpose of increase of safety of the crews and patients – both before incident on May 31, and after.