In Iraq the helicopter with refugees 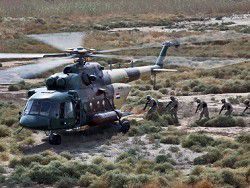 The Mi-17 helicopter which was taking out refugees, broke in Iraq. The pilot, among victims – the deputy of the Iraq parliament was lost, reports Associated Press referring to military.

The helicopter delivered humanitarian assistance to the Kurds-ezidam who have taken cover on the mountain Sindzhar from Islamists, and on the way back took aboard to 25 refugees. Because of an overload during take-off as military declared, Mi-17 ran uphill.

Passengers and the survived crew members managed to leave the car independently. Among victims there was deputy Vian Dakil representing in parliament interests of Kurds, and also the reporter of the American The New York Times newspaper Alice Rubin and photographer Adam Ferguson. All wounded were evacuated in one of hospitals of the Iraq Kurdistan.

Fighters of group «Islamic caliphate» began approach to the northern and western regions of Iraq in June 2014. Radicals managed to take some cities under the control: on June 10th they took Mosul, next day – Tikrit, and in some days approached closely to Baghdad. On August 3 members of IGIL managed to take over the control of two large oil fields, and then to grasp the dam largest in the country.

On July 4 fighters took over the control of the city of Sindzhar in which lived езиды, having demanded from them to accept Islam. Tens of thousands of Kurds took cover on the mountain Sindzhar where they faced shortage of the food and water.