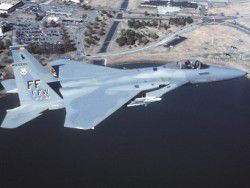 The fighters of U.S. Air Force F-15C placed last week on air base "Inzhirlik" in the south of Turkey, are intended for protection of the American warplanes striking blows to the purposes IGIL in Syria, and also possible counteraction of the Russian aircraft, the newspaper "Yu-Es-Ey tudy" reports, referring to a source in the Pentagon.

The representative of defensive department on the condition of anonymity specified that the fighters F-15C will provide air cover of the American bombers, attack planes, and also the military transport planes delivering the weapon for the Syrian opposition, from the Russian and Syrian fighters.

The USA already placed on air base "Inzhirlik" six F-15C planes last week, and also group of attack planes A-10. Six more F-15E drawing of blows on the land purposes will be which main task, will arrive to Turkey soon.

"Far-sighted experts in planning provide all possible perspective scenarios", – the retired colonel general of the U.S. Air Force David Deptula being the dean of Institute of space researches of a name of Mitchell told. "But thus the conflict to Russia is what do not want neither the USA, nor Russia", – the general emphasized. According to him, placement of fighters for interception of enemy planes is only an element of careful planning, instead of provocation.

Past week the official representative of the Pentagon Laura Sil reported to the Washington The Daily Beast edition that placement of the fighters F-15C on air base in Turkey which military department declared at the end of October, is intended for "safety" of allies of the USA on NATO

L.Sil refused to open specific objectives of the American fighters which will be equipped only with class "air-air" rockets, however emphasized: "I did not tell that it is not connected with Russia".

According to the edition, it can mean that F-15C, equipped with six air-air rockets, will accompany attack planes and bombers during airstrikes on the purposes of fighters of IGIL near the line of contact with the Syrian armies and an area of coverage of the Russian aircraft, notes the edition, emphasizing that tracking Russian" can be their main task ".

At this The Daily Beast reminds that within operation against IGIL Russia placed on air base under the Syrian city of Latakia six fighters Su-30, also intended, first of all, for conducting air fight, however IGIL have no aircraft.