The Russian helicopter complexes are demanded in the world 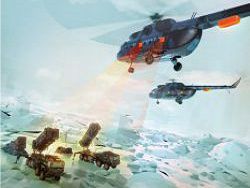 The concern "Radio-electronic technologies" on Wednesday transferred to VS Russian Federation the first three helicopter Mi8-MTPR1 complexes. According to the general director of the company, new complexes were developed by enterprise divisions literally a few years ago.

Helicopter complexes with station of active hindrances of "Rychag-AV" are demanded today as in the Russian army, and abroad, the first deputy director general of the Russian concern "Radio-electronic technologies" (KRET, enters into Rostekh Group) Igor Nasenkov declared.

On Wednesday the concern transferred to VS Russian Federation the first three helicopter Mi8-MTPR1 complexes – Mi helicopters – 8MTB – 5-1 with station of active hindrances of "Rychag-AV". This complex is capable to provide group protection of planes, helicopters, pilotless aircraft, land equipment and the ships against air attacks and blows of air defense of the opponent in radius of several hundred kilometers. Now at the Kazan optiko-mechanical plant the Lever complexes equip some more Mi-8 helicopters.

"Today there was an early delivery, practically before term for a month, in Armed forces of the Russian Federation of helicopters directors of hindrances. It protects planes from means of air attack, anti-aircraft weapons of the opponent, also can protect land equipment from means of defeat of the opponent. Does it at distance from 100 kilometers and more and can suppress at the same time some purposes", – Nasenkov to journalists after ceremony of sending of helicopters told.

According to Nasenkov, new complexes were developed by the concern enterprises literally a few years ago. "The most up-to-date samples which are demanded and in the Russian army, and foreign customers in turn stand, but while we will not sell them", – he specified.

The Lever complexes can be established on any kind of equipment, stationary or mobile objects. Analogs of placement of these complexes by helicopters in the world are not present. When manufacturing "Lever" the most modern technologies, bases and the accessories which are completely independent of foreign suppliers are used.

"Rychag-AV" it is constructed on the basis of multibeam antenna lattices. At formation of signals in station the technology of digital processing and record of a radio signal which guarantees steady reception of signals of radar-tracking means and their radio suppression on all area of coverage is used. The database is stored in system of "Lever" about different military facilities that allows it to define type of the purpose and to select for it the most effective hindrances.