The Mi-28H helicopter was highly appreciated by the American experts 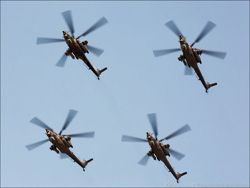 Experts of the American research corporation "Rand" highly appreciate the Russian shock Mi-28H helicopter "Night hunter" (on NATO classification: Havoc – an opustoshitel). About it it is told in the published report of corporation devoted to comparison of arms and military equipment (VIVT) of production of the USA and other countries of the world.

The American experts especially noted security of the car, having specified that the armored plane-parallel glazing of a cabin maintains hit of bullets of calibre of 12,7 mm and 14,5 mm, and screw blades – a calibre shell to 30 mm. "From the very beginning of design in Mi-28H the raised standards of survivability were put", – experts added, having noted that the visibility of engines of the helicopter in an infra-red range is lowered in comparison with Mi-24 in 2,5 times. The system of shooting of blades of the screw and a lamp of a cabin which allows pilots to leave safely the helicopter in case of emergency in air received special attention of researchers.

The arms Mi-28H consisting of 30-mm of a gun 2А42, anti-tank Storm guided missiles (PTUR) 9М114 / 9М120 "Attack", uncontrollable aviation rockets (PLANK BEDS) of calibres of 80 mm and 122 mm, and also class rockets "air – air" allow "Igla-V", according to experts, to strike all types of the purposes on a modern battlefield. "Gun application 2А42, established on the Russian BMP, allows to simplify also preparation of helicopter technicians", – is told in the report. The complex of onboard defense (KBO) and a set of the radio-electronic equipment do not concede to the American analogs, experts "Rand" noted.

As one of few shortcomings they noted separate delivery in armies of Mi-28H helicopters, nadvtulochny RLS and elements of the optoelectronic equipment.