The USA will help Georgia by military helicopters 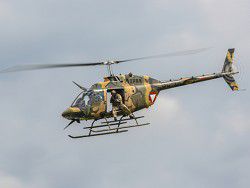 The USA will occupy "leading role" in an implementatsiya of NATO approved by the summit in Wales on September 4-5 a package of "the strengthened cooperation" with Georgia, the Minister of Defence of Georgia Irakly Alasany at a joint briefing in Tbilisi with the head of the Pentagon Chuck Heygel who has arrived to the country with 2-day official visit declared on Sunday.

Details of the help will be defined soon after expert consultations. But already precisely it is known that Americans will help Georgians to update park of military helicopters. It was confirmed also by Chuck Heygel. At the beginning of this year the Georgian military said that wish to replace Soviet and Russian Mi with American "mohawks" – according to the plan of re-equipment of the Armed forces transferred to standards of NATO.

Americans began deliveries of "mohawks" to Georgia at the beginning of the 2000th, at the desire of president Edward Shevardnadze of that time. Then in the USA started to prepare the Georgian military pilots. At Mikheil Saakashvili, the ambassador of war of 2008, the West started to "freeze" military cooperation with Georgia. Now for such contacts of barriers is not present more. Repair being while on arms of the Georgian army of Mi in Russia for obvious reasons is impossible. Earlier with it Ukraine, but now a situation helped with this country too does not allow to do it. "We should not depend on restrictions concerning, for example, purchases of accessories", – told "RG" the head of the Georgian defensive department. Therefore "helicopter cooperation" between the USA and Georgia will be renewed. While it is not clear, how many gelikopter will be delivered by Americans to Georgians. Tbilisi expects to receive from Washington and other military help – only the defensive plan.

During negotiations with Alasany’s American colleague confirmed that Georgia will continue to help NATO officials with Afghanistan in 2015. Besides, Georgia is ready to join in Forces of fast reaction of North Atlantic alliance next year.