Marines of the USA wrote off the last Huey 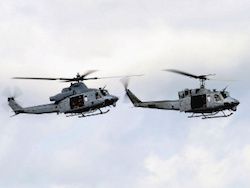 The marines of the USA wrote off the last multi-purpose Bell UH-1N Huey helicopter standing on service more than 40 years. As reports Jane’s, ceremony took place on August 28 on the basis of Naval Forces of the USA in New Orleans.

The last Huey of marines was taken advantage in 1971. In operations he participated up to 2010 (within operation in Afghanistan).

In total on arms of the Case of marines of the USA there were 205 UH-1N helicopters. The written-off cars replaced with modern multi-purpose Bell UH-1Y Venom helicopters.

UH-1Y is developed on the basis of the same case, as his predecessor, but is slightly more than Huey on dimensions and essentially surpasses it in technical characteristics: loading capacity, speed and range of flight, ballistic protection and safety. In total marines by 2018 will receive 160 UH-1Y Venom.

Bell UH-1N Huey still are adopted by the U.S. Air Force and two tens more countries, including Great Britain, Spain, Peru, Japan and Iran. The helicopter gathers speed to 220 kilometers per hour and is capable to overcome to 460 kilometers. It is armed with two machine guns – calibre of 12,7 and 7,62 millimeters – and can bear containers with uncontrollable rockets of calibre of 70 millimeters.