NI: list of the most terrible fighters which are at war in Syria 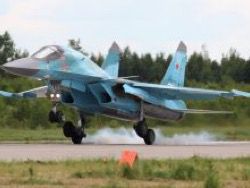 The observer of The National Interest Deyv Majumdar made the list of the most killing fighters which are at war in Syria into which two Russian planes entered at once, writes RIA Novosti news agency.

In particular, Russian Su-34 who replaced the predecessor – Su-24 is called one of the most powerful. According to Majumdar, this fighter possesses powerful possibilities of self-defense "air-air", besides, along with R-73 short-range missiles it is equipped with long-range missiles and radar-tracking prompting of the class "air-air" R-77. One more basic feature of the plane – a radar, allowing to distinguish threat behind.

Also the list included the multipurpose fighter Su-30 which is using generally to accompany warplanes during the operations "air-air", however thus possessing in powerful potential for drawing of blows "air earth".

Among planes of other states attacking positions of fighters «Islamic state» Majumdar noted multi-purpose истребтиель F-22 Raptor U.S. Air Force with a high-speed fighting platform. The American military use it for investigation, control and management.

Also in the list there were Boeing EA – 18 Growler – the deck plane of radio-electronic fight of Naval Forces of the USA which can put out of action a radar and communications of the opponent thanks to a set of sensors, among which broadband the ALQ-218 receiver and the module for creation of hindrances of ALQ-99.

On the last place there was French Dassault Rafale with an electronic radar of Thales RBE2 for scanning of the district which in the future is planned to replace with ASEA system.