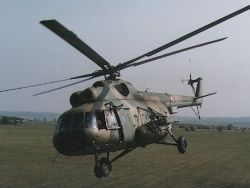 Rebels near Georgiyevk’s village of Lugansk area brought down on August 20 the Air Force Mi-24 helicopter of Ukraine which was on a fighting task, crew members were lost, the representative of SNBO information and analysis center of Ukraine Andrey Lysenko reported at a briefing on Friday in Kiev.

He noted that in SNBO about it did not report earlier, "that it was possible to perform search operation and to deliver bodies of pilots to our territory".

At the same time, Lysenko did not specify number of victims.

Mi-24 – the transport and combat helicopter. The crew usually consists of two-three people – the pilot, the operator and in some updatings of the car of the flight mechanic.

About that to insurgents was possible to bring down some Air Force aircraft of Ukraine, in a staff of the self-proclaimed Lugansk national republic reported on August 20.