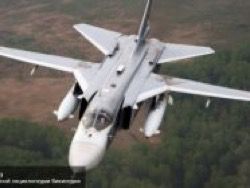 The Ministry of Defence of the Russian Federation confirmed officially that in Syria on border with Turkey the Russian fighter Su-24 was wrecked.

Let’s remind, messages that planes of the Turkish Air Force lined on border with Syria broken air space of Turkey the plane earlier arrived. Soon it became known that the fighter which has fallen to the territories of Syria, near the mountain the Turkmen, is the Russian Su-24 plane.

In the Ministry of Defence officially declared that the Russian plane did not break air space of Turkey, and it proves to be true means of land control. The plane was only over the territory of Syria and flied at height about 6 thousand meters.

According to the Ministry of Defence for last two days of VKS Russian Federation in Syria 141 fighting departures are executed and blows are struck to 472 objects of terrorists.