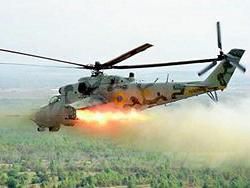 On June 13, 2014 the Ukrainian military helicopter, pursuing group of rebels, crossed border of Ukraine with the Russian Federation and attacked the village in the Rostov region "New Hope", Igor Strelkov reports.

This village is at distance about a kilometer from border. On a place of crash of the shock helicopter there was a fire and a part of the population it was necessary to evacuate.
The Ministries of Emergency Situations of the Russian Federation across the Rostov region and FSB frontier management in the territory of Russia did not confirm the fact of a crash of helicopter – "most likely it fell to the Ukrainian territory".

Let’s remind that earlier it was reported that the Ukrainian military on armoured personnel carriers intruded in the Kuibyshev area. The Ministry of Foreign Affairs of the Russian Federation already sent a note of protest to Kiev on this incident.