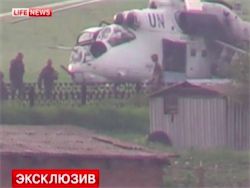 In time боёв at the international airport of Donetsk the Ukrainian army used the Mi-24 helicopter with symbolics of the United Nations. It on a place of events was seen by the correspondent of RIA Novosti news agency, also it was fixed on many video and photographic materials from the airport.

It not the first case when in the southeast of Ukraine notice the helicopter with symbolics of the United Nations. Before Mi-24 with symbolics of the international organization were used by the Ukrainian army in fights near Kramatorsk. However the Ukrainian military explained this fact to that helicopters which really participated in peacekeeping operations in Libya and Mali simply did not manage to recolour. Military also under control to Kiev used Mi-8 helicopters and "Sukhoi" company planes in attack to positions of rebels.

As to the previous case, the United Nations yet did not establish, whether really the Kiev authorities involved helicopters with symbolics of the world organization in the southeast of Ukraine. It in the evening on May 23 was declared to journalists by the official representative of the secretary general of the United Nations Stephane Dyuzharrik.

In the afternoon on May 26 in Twitter of the Donetsk national republic there was information that the Ukrainian army attacks the international airport of Donetsk. It was reported that security officers bomb the airport from air. On forces of self-defense it was opened fire from machine guns.

Later representatives of DNR reported in the microblog that rebels managed to establish control over an airport building. At present activists of self-defense carry out cleaning.

Moreover, there was information that the Ukrainian army fired at group of journalists from the helicopter.