Whether the president was going to fish? 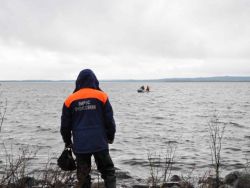 Five days later after a crash of helicopter of Mi-8 in Murmansk region clarities in that, why large regional officials and businessmen went to flight, still not.

Let’s remind: the Mi-8 helicopter belonging to JSC SPARK avia, broke on May 31 at Munozer’s coast in the Tersky region of Murmansk region.

According to the investigation, the helicopter took off about eight evenings from the airport Apatity, landed around the Heel camp on the river Varzuga, took aboard some more people and departed towards Munozer near whom there is an Apatit enterprise recreation facility. But without having reached it, failed to the lake and broke up into three parts.

Reach a crash place other helicopters could not: there was a strong fog. As a result rescuers from Murmansk search group and GU Ministry of Emergency Situations reached a crash place by all-terrain vehicles. Divers found the helicopter at the bottom of the lake. From 19 being onboard people two survived only: the deputy general director on regional development of the St. Petersburg institute of forestry Alexander Stepchenko and the chief physician of sanatorium "Tirvas" Valery Kuptsov.

Right after accident of RIA Novosti news agency published the message that, according to an agency source, passengers of Mi-8 went on fishing. Next day it consistently added: in the government of Murmansk region deny that officials made a working trip, and quoted the representative of the Murmansk government Denis Pushina who directly declared that the helicopter was rented for the personal purposes: «It is a question of the private program, most likely, about fishing. It is a traditional form of leisure in Murmansk region».

However only two hours later Pushin disproved the words. He declared to agency that «the helicopter was involved in a framework of a working trip on development of a tourist cluster of Murmansk region», and governor of the region Marina Kovtun confirmed that Mi-8 went on flight of the territory of national park.

Further the official version was not concretized, but formulated more and more difficult. The director general of "PhosAgro" (the "parent" company of "Apatite") Andrey Gurjev reported that flight «was organized within collaboration in development of infrastructure of fishing tourism in the south of the Kola Peninsula in response to the agreement signed between JSC Apatit and the government of Murmansk region». ("Apatite" and administration of the region really has joint projects, for example, a ski resort «Big Vudjyavr» in Kirovsk.)

According to the official statement of "PhosAgro", studying of capacity of the tourist and recreational sphere of Murmansk region, acquaintance with existing tourist infrastructure of JSC Apatit and the points, capable to draw attention of the investors interested in development of tourism» was a purpose of visit «.

The version causes at once some questions. First, why to examine infrastructure it was required on Saturday evening and in such diverse company? Why flight did not postpone, despite of a dense fog and an adverse weather forecast? Why to the private company "Apatit" to provide the helicopter? And from where the initial version about a non-working purpose of visit?

Moreover, the acting regional minister of natural resources of area and ecology Feodor Schweitzer who has replaced lost minister Alexey Smirnov, could not name "Nova" the flight purpose. The staff of sanatorium "Tivas" did not know, how their chief physician Valery Kuptsov (it is in hospital with fractures of feet) appeared onboard the helicopter, but explained that questions to them ordered not to answer, and to all journalists to give certain phone in Apatity. It appeared phone of the press service of "PhosAgro".

It is possible to assume two possible purposes of flight of Mi-8. The first: the high-ranking officials as it was already told, arranged banal flight on fishing. On the Kola rivers the salmon just went, the most fish places are available only by the helicopter, the river Varzuga on which did a stop of Mi-8, – one of the most beautiful on all peninsula, and about Munozer where the helicopter broke, is the large recreation facility belonging to "Apatite".

Fishings of large officials on which including political and economic affairs are discussed, are very accepted in area. On hearings, they affected and career present governor of the region Marina Kovtun. In 2006-2009 she headed department of development of tourism of department of economic development of Murmansk region and happened on friendly fishings to federal officials. By the way, the governor often used broken on Munozera Mi-8 for working flights on area, preferring it to the car.

However sources "Nova" in Murmansk, knowing participants of flight, are sure: be fond of fishing two three from them could only. The most high-ranking – the deputy governor of area Sergey Skomorokhov and the minister of natural resources Alexey Smirnov at all were not fishermen.

On video made at the airport of Apatity when passengers sat down in the helicopter, it is visible that almost all of them are dressed in suits, from luggage take only portfolios and city suitcases on the castors, obviously calculated not for one day.

From here – the second version of flight of Mi-8: the high-ranking Murmansk officials and managers of the Apatit company were engaged in preparation of visit of Vladimir Putin. The regional news agency FlashNord, but Vladimir Putin Dmitry Peskov’s press secretary reported about it immediately to the first this version disproved. He declared to journalists that the president in Hibina did not gather for fishing: «It not so, in the next few days at Vladimir Vladimirovich very intense schedule».

Nevertheless, according to two sources "Nova" in Murmansk (to confirm it officially, of course, it was not possible), Putin’s visit was planned for June 4-5, before its trip to France. It was planned that at first the president проинспектирует the Northern fleet in Severomorsk, then will fly Hibina and declares creation here national park (last May there it was decided to clear the industrial road because of what round the national park organization all year there were scandals), and at the end of some hours will fish somewhere on Kola. In area hoped that governor Marina Kovtun will accompany Putin – before autumn elections to appear in television plots near the president would be for it very opportunely.

This version explains also use of the private helicopter. As approves a source "New" in Murmansk, the region is actually assigned to three companies: "Norilsk Nickel", "PhosAgro", together with subsidiary "Apatit", and "Acron" (is more exact, its affiliated «The northwest phosphoric company»). They are responsible for everything that occurs in the region: for example, before visit of president Medvedev in Hibina the Apatit company cleaned roads. The Kirov area – also the "Apatite" ancestral lands. And it is logical, what exactly this firm allocated the helicopter for flight of officials.

Separate interest represents, as there was in the helicopter one of survived – the deputy director of the St. Petersburg research institute of forestry Alexander Stepchenko. Onboard there were the two more officials connected with the wood sphere: the head of the department of forestry of SZFO Oleg Verenikin from Petersburg and the employee of committee of forestry across Murmansk region Alexander Kiselyov. All of them could prepare and creation of national park, and its demonstration for the president. However the director of Institute of forestry Igor Vasilyev told "Nova" that Stepchenko since Friday was on holiday and in Murmansk it had no working tasks.

One contradicts the version about Putin’s visit only: at the airport of Murmansk for an arrival of the president did not prepare. Usually it appeared on several boards: three presidential planes, a cargo board with limousines, one more – with special communication, planes with a journalistic pool and protection. Preliminary flights of employees of FSO begin days for five before visit. Before crash of Mi-8 at the airport of their Murmansk was not. (It is curious, as usual there passes preparation of visits of Putin and Medvedev. In last times on routes where distinguished guests should pass, hastily changed asphalt and exposed a cordon from policemen at whom just in case selected a government-issue weapon. Policemen on deaf country sites of roads very much worried: they without the weapon – and suddenly towards a bear?)

To learn precisely a route of flight of officials hardly it will be possible. As the chief of operational staff on accident investigation Nikolay Berezhnaya explained "Nova", a real route of the helicopter could not be at anybody, except the pilot, in advance it was not reported. Careful it is known only that in flight plan there was no stop on Munozera: to sit down there the helicopter should not. The source "Nova" tried to find flight plan in the airport of Murmansk itself, but colleagues stopped it: «Why to you trouble with intelligence services?»

Single question – the reasons of crash of the helicopter. In Investigatory committee consider two versions: malfunction of equipment and difficult meteoconditions in which the pilot lost orientation in space and faced a water surface. Both «black a box» are already found, the Interstate aviation committee investigating accident is engaged in interpretation of records.

As it was possible to find out "Nova", the commander of crew Alexey Tovleko was only 39 years old. The commander it became recently, before flied the second pilot, but the Kola Peninsula knew very well. The second pilot and technicians, by data "Nova", were from Petersburg: the helicopter belonging to the Apatit company was in operation peterburzhsky «SPARK of an avia», it and was responsible for crews.

Sources of the new are sure of technical serviceability of the helicopter. Mi-8 started to use only in the autumn of 2008, it still had 70 hours before the first planned extension of a resource – it was almost new.

According to the story of the employee of the Murmansk airport, on Saturday to the city from Helsinki 70 foreign tourists arrived. All of them carried on different recreation facilities by helicopters. Because of a fog and very poor visibility helicopters long could not take off, tourists sent small groups. But in the helicopter belonging to JSC Apatit, there was at the same time director general of "Apatite" Alexey Grigoriev and his deputy Konstantin Nikitin. Hardly the crew would began to argue with them. Mi-8 took off, despite a fog.

As assumes a source "Nova", the helicopter fell most low in search of the "Apatite" camp site on which wanted to land, long could not find it in a fog and did not calculate height concerning water.

According to the chief of a staff Nikolay Berezhnogo, a body of 15 victims are already found, 10 from them are identified. Chances that someone from two not found passengers will appear in live, already is not present.