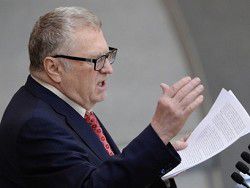 Zhirinovsky will demand to close the clubs which have not cancelled show in a day of mourning Besides, the leader of LDPR in connection with crash of the Russian liner suggested to recreate the Ministry of civil aviation

The LDPR will demand to close the night clubs which have not cancelled action in a day of mourning on victims of plane crash А321 in Egypt, party leader Vladimir Zhirinovsky reported on air «Russian news service».

«I hope, the mourning entered in the country, all will observe. Though there is information that some clubs in Moscow ignore it. We on Monday will demand to withdraw at them licenses because the decree of the president is sacred for all country», – Zhirinovsky emphasized.

Due to the crash of the Russian liner he also suggested to recreate the Ministry of civil aviation as, in his opinion, the Rosaviation is not capable to supervise such big sector.

«It is impossible, that the small federal agency watched huge fleet of the country. Russia needs the separate ministry of aircraft. We now tired out everything in Ministry of Transport, except the Russian Railway. As it is impossible» – Zhirinovsky is sure.

He also urged to deprive the small companies of the right to make the flights calculated more than on 50 people. In his opinion, in Russia there are too much small companies which hand over the planes under charter flights for extraction of the maximum profit to the detriment of safety of passengers. In this regard he suggested to reduce quantity of air carriers at the expense of their integration.

Aviation sector, as well as all heavy industry, according to Zhirinovsky, it is necessary to nationalize. «The market will kill Russia. The market at the tsar and the USSR was not. It in Finland, in Poland – anywhere. If we have a market, we several times in a year will declare mourning. It not the best option, but for the sake of safety is better monopoly», – the leader of LDPR emphasized.

Crash of the Russian plane in Egypt became the major accident in Russia. 224 persons were lost. According to the Airbus company, the A321 liner was let out in 1997 and was in operation in Russia since 2012. During this time he made about 21 thousand flights.

The president of the Russian Federation Vladimir Putin declared on November 1 a day of mourning. It decided this day to lower a little national flags in all territory of Russia and offered cultural institutions and broadcasting companies on November 1 to cancel entertaining actions and transfers.