In Japan tests of the competitor of SuperJet-100 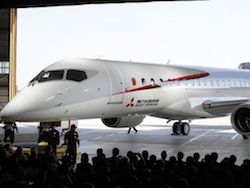 Mitsubishi Regional Jet becomes the Japanese plane of own development first for long time. Its tests were several times postponed, but as a result began successfully.

The Japanese corporation Mitsubishi started tests the first, since the Second World War, the MRJ plane. The medium-haul airliner becomes the first Japanese civil plane since 1965. Liner dispersal till take-off speed of 220 km/h and with an objective the plane, on assurances of verifiers became the first stage, consulted perfectly well.

Tests of the liner were several times postponed because of small breakages and defects, however engineers managed to eliminate operatively them and the pilot dispersed the car till demanded speed with hardly any trouble at all. Developers are sure that MRJ can already fly up, but permissions from the commission of the ministry of transport are required.

The Japanese liner becomes the competitor for the Russian SuperJet-100. He can make flights on distance from 1,5 to 3,5 km and take aboard to 90 passengers. It is supposed that regional airlines, including Japanese become the main operators of MRJ. Mitsubishi already have an order for 400 planes, total cost of 1,4 billion dollars. Though on development of the liner cunningly 1,6 billion dollars, are sure of company management that the project will be economically successful and can pay off after the new car will prove in business.